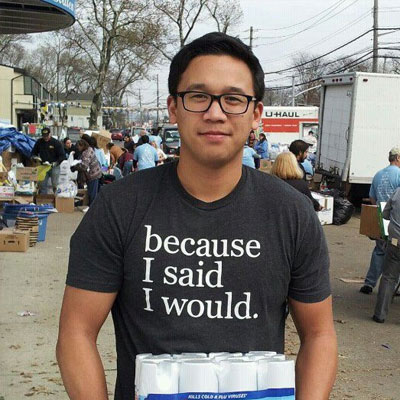 Alex Sheen’s father died of small cell lung cancer on September 4th, 2012. His father was good with his promises, so Alex titled his father’s eulogy “because I said I would” and created the promise card in his memory. Eventually Alex would decide to resign from his corporate position in order to advance because I said I would‘s mission.

Alex now works to better of humanity through the importance of a promise in what little ways he can. It started by waking up early before going to work and handwriting letters to people thanking them for requesting promise cards. This dedication continued to develop as he began fulfilling charitable promises. These promises include getting 100 tickets to Disneyland for children with cancer and walking 245 miles across the entire state of Ohio in 10 days to raise awareness for the victims of sexual violence (a promise he made to Amanda Berry, Gina DeJesus and Michelle Knight). Alex now gives speeches on behalf of because I said I would in order to fund the work of this nonprofit organization. If you are interested in having Alex come speak to your group, click here.

Alex was born in Toledo, Ohio and was raised in Powell, Ohio. He graduated from Olentangy High School in 2003 and continuedAlex’s Facebook Page his academic career at Ohio University as a proud Bobcat where he received his B.B.A. in Marketing. In 2007, Alex moved to Lakewood, Ohio where he currently resides with his incredibly adorable dog, Kimchi. He was a Corporate Strategy Lead at Hyland Software until March 2013.