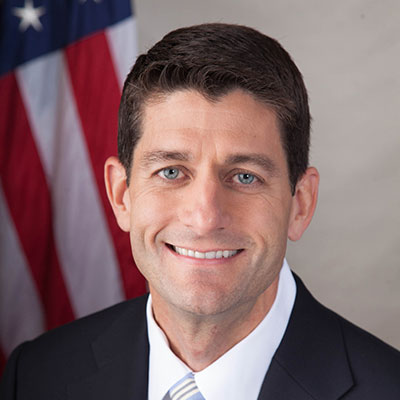 Born and raised in the community of Janesville, Paul Ryan is a fifth-generation Wisconsin native. Currently serving his ninth term as a member of Congress, Paul works on many important issues affecting Wisconsin residents and is an effective advocate for the First Congressional District.

He is the chairman of the House Ways and Means Committee, where he focuses on many issues across the federal government, such as fixing our broken tax code, holding the IRS accountable, strengthening Medicare and Social Security, repairing the safety net, promoting job-creating trade agreements, and developing patient- centered solutions to make health care more affordable.

During the 112th & 113th Congresses, he served as chairman of the House Budget Committee, where he put forward specific plans to tackle our looming fiscal crisis, driven by the dramatic rise in entitlement spending. These plans, titled “The Path to Prosperity,” would help spur job creation, stop spending money the government doesn’t have, and lift the crushing burden of debt, putting the federal budget on the path to balance.

Paul is a graduate of Joseph A. Craig High School in Janesville and earned a degree in economics and political science from Miami University in Ohio.
Paul and his wife Janna live in Janesville with their children, daughter Liza and sons Charlie and Sam. The youngest of four children, Paul is the son of Paul Sr. (deceased) and Betty Ryan.